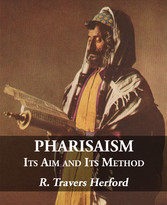 Pharisaism: Its Aim and Its Method

Pharisaism: Its Aim and Its Method


Most of the contents
of the following pages were given as lectures in Manchester College, Oxford, in
the autumn of 1911. I have thought it better to confine myself within the
limits of what I then said, rather than to expand and recast the lectures into
a complete monograph on the Pharisees. My aim throughout has been to present
and make clear the Pharisaic conception of religion, the point of view from
which they regarded it, and the methods by which they dealt with it. It is far
more important that the reader, especially the Christian reader, should
understand the meaning of Pharisaism than that he should be presented with a
survey of all the details, theological, ethical, historical, and other, included in the wide field of the Pharisaic literature. I am
not without hope that a small book may be read where a large one would be
passed by, and that the ends of justice-in this case justice to the
Pharisees-may thereby be the better attained. I have not sought to write a
panegyric on them, but, so far as may be possible for one who is not a Jew, to
present their case from their own standpoint, and not, as is so often done, as
a mere foil to the Christian religion. This is one reason why I have not
referred to the writings of other scholars, except in the one case of Weber. He
is typical of them all in their attitude towards Rabbinical Judaism. Even the
fine work of Oesterley and Box, The Religion and Worship of
the Synagogue, though it is written in a spirit of courtesy, and with a
sincere desire to understand the Rabbinical position and to recognise whatever
is good in it, yet judges it by the standard of the Christian religion.
Something was still left to be done, by way of treating Pharisaism fairly, that is, without either contempt or condescension;
and that 'something' I have tried to do-whether successfully or not, the candid
reader will judge.


In conclusion, I
tender my thanks to the Hibbert Trustees, to whom I owe the opportunity of
delivering the lectures, and to the authorities of Manchester College, Oxford,
for the invitation to do so.