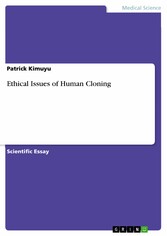 
Scientific Essay from the year 2017 in the subject Medicine - Medical Frontiers and Special Areas, grade: 1, , language: English, abstract: This essay will give an overview on the ethics of human cloning. It will provide a concise summary on the development of cloning and then discuss the scientific, societal and religious ethical perspectives to the issue. Genetic engineering is currently gaining unprecedented popularity owing to its usefulness in solving numerous biological problems. It has become a powerful tool in virtually all biological aspects of life. In medicine, genetic engineering has proven to be reliable in treating and managing biological disorders. It has also gained popularity in addressing the challenges posed by chronic diseases such as diabetes. The discovery of the so-called Induced Adult Stem-Cell Therapy and the industrial production of Insulin for treatment of diabetes seem to have shaped the social perspective of genetic engineering. On the other hand, genetic engineering technology has become one of the most reliable biological tools for increasing food production for rapidly growing global population. However, despite the numerous benefits of genetic engineering, immense criticism has emerged, especially with regard to the ethical perspective of the technology. Scientists are in unprecedented dilemma of whether the reproduction of cloned organisms will cause undesirable physical and behavioral traits, leading to the alteration of 'normal' organisms. Currently, there has emerged immense debate on human cloning leading to the shift of ethical perception on genetic engineering. Human cloning is believed to be one of the most popular biotechnological approaches with widespread adoption in the medical field. This is probably so because it has enabled medical professionals to address some of the most challenging health issues by providing them with extensive medical approach into an array of diseases and health conditions. Some of the medical applications, which have created unprecedented ethical debates among the global population, are the Somatic-cell Nuclear Transfer and test tube baby technology.