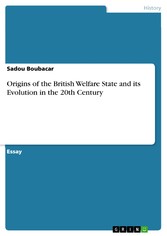 
Essay from the year 2017 in the subject History Europe - Other Countries - Modern Times, Absolutism, Industrialization, grade: -, , course: British Welfare State, language: English, abstract: If one was to broadly assert about the main areas of concern and interest for any given state, nation state or whichever form of governance, the domestic policies and the foreign ones would probably be the answer. Though many political entities in the past, or in the present, tend to overlook the domestic matters, it almost always proves to be the case that domestic affairs are as much important as foreign influence - if not much more. In the case of Britain, which formerly led an unchallenged imperial life from the 15th century to the 20th century, many internal social polices had to be carried out during the first half of the 20th century. This move towards the improvement of living conditions in Britain gradually evolved to facilitate the creation of the welfare state in 1945. A broad definition of a welfare state would include the many services every state provides, but in the case of Britain the term takes a more narrowed meaning. A welfare state is that state which provides benefits to its citizens in such areas as unemployment, medical care, education and housing. Before we mention such welfare policies under the Labour Party in Britain after World War II, we will take a look at a background to it, and then we will enumerate some difficulties and the consequential comeback to power of the Conservatives in 1951.