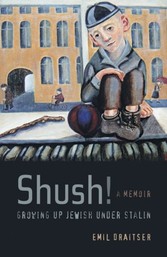 Shush! Growing Up Jewish under Stalin - A Memoir

Shush! Growing Up Jewish under Stalin - A Memoir

Many years after making his way to America from Odessa in Soviet Ukraine, Emil Draitser made a startling discovery: every time he uttered the word &quote,Jewish&quote,-even in casual conversation-he lowered his voice. This behavior was a natural by-product, he realized, of growing up in the anti-Semitic, post-Holocaust Soviet Union, when &quote,Shush!&quote, was the most frequent word he heard: &quote,Don't use your Jewish name in public. Don't speak a word of Yiddish. And don't cry over your murdered relatives.&quote, This compelling memoir conveys the reader back to Draitser's childhood and provides a unique account of midtwentieth-century life in Russia as the young Draitser struggles to reconcile the harsh values of Soviet society with the values of his working-class Jewish family. Lively, evocative, and rich with humor, this unforgettable story ends with the death of Stalin and, through life stories of the author's ancestors, presents a sweeping panorama of two centuries of Jewish history in Russia.