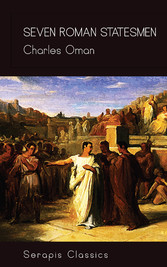 THERE WAS A TIME, NOT so very long ago, when the taunt was true that history was written as if it were a mere string of anecdotal biographies of great men. But for the last forty years the pendulum has been swinging so much in the other direction, that it has become necessary to enforce the lesson that the biographies of great men are, after all, a most important part of history. It is well to have conceptions of the streams of tendency and the typical developments of every age, but the blessed word 'evolution' will not account for everything, and it is absurd to neglect the influence of the great personalities. Roman history in particular has been so much treated of late years as a mere example of constitutional growth and degeneration, or as a bundle of interesting administrative and legal details, that it seems not out of place to recall that other aspect of it which was more familiar to elder generations, and to look at it for a moment from the personal and biographical point of view, with Plutarch before us as well as Mommsen and Marquardt's Stoatsrecht and Staatsverwaltung. This is all the more rational because in the last century of the Roman Republic we find ourselves in a time of dominating personalities. In Rome's earlier days this was conspicuously not the case, and her history was (as has been truly said) the history of great achievements done by men who were themselves not great. But from the Gracchi onward we come to a period in which individuals make and mar the course of the times, when the doings of a Sulla and a Caesar, or even of a Marius and a Pompey, form the main determining element in the history of the day...