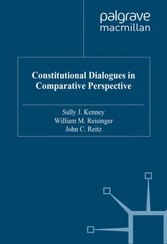 From Russia and Hungary to the United States and Canada, including Britain, France, and Germany, courts are increasingly recognised as political institutions that are important players in political systems. In addition, transnational courts such as the European Court of Justice and European Court of Human Rights are extending their reach and affecting more than ever the politics of member states. The book contains essays written by scholars of law and political science exploring in interdisciplinary fashion the relationship between law and politics in cross-national perspective, focusing principally on contemporary Europe.