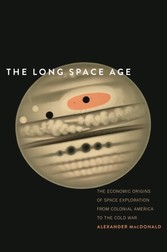 An economic historian argues that privately funded space exploration is not a new development, but a trend beginning with the astronomical observatories of the nineteenth century Over the last half-century there has been a rapid expansion in commerce off the surface of our planet. Nations and corporations have placed hundreds of satellites that provide billions of dollars' worth of communications, scientific, global positioning, and commercial services, while construction has been completed on humanity's ninth and largest space station. On the planet itself, government agencies, corporations, and individuals plan for the expansion of economic development to the lunar surface, asteroids, and Mars. The future of space exploration seems likely to include a mix of large government funded missions as well as independent private-sector missions. The Long Space Age examines the economic history of American space exploration and spaceflight, from early astronomical observatories to the International Space Station, and argues that the contemporary rise of private-sector efforts is the re-emergence of a long-run trend not a new phenomenon.