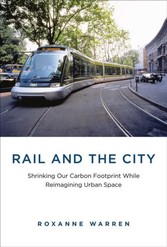 The United States has evolved into a nation of twenty densely populated megaregions. Yet despite the environmental advantages of urban density, urban sprawl and reliance on the private car still set the pattern for most new development. Cars guzzle not only gas but also space, as massive acreage is dedicated to roadways and parking. Even more pressing, the replication of this pattern throughout the fast-developing world makes it doubtful that we will achieve the reductions in carbon emissions needed to avoid climate catastrophe. In Rail and the City, architect Roxanne Warren makes the case for compact urban development that is supported by rail transit. Calling the automobile a relic of the twentieth century, Warren envisions a release from the tyrannies of traffic congestion, petroleum dependence, and an oppressively paved environment. Technical features of rail are key to its high capacities, safety at high speeds, and compactness -- uniquely qualifying it to serve as ideal infrastructure within and between cities. Ultimately, mobility could be achieved through extensive networks of public transit, particularly rail, supplemented by buses, cycling, walking, car-sharing, and small, flexible vehicles. High-speed rail, fed by local transit, could eliminate the need for petroleum-intensive plane trips of less than 500 miles.Warren considers issues of access to transit, citing examples from Europe, Japan, and North America, and pedestrian- and transit-oriented urban design. Rail transit, she argues, is the essential infrastructure for a fluidly functioning urban society.