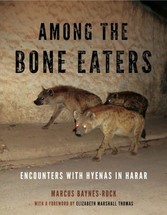 Among the Bone Eaters - Encounters with Hyenas in Harar

Among the Bone Eaters - Encounters with Hyenas in Harar

Biologists studying large carnivores in wild places usually do so from a distance, using telemetry and noninvasive methods of data collection. So what happens when an anthropologist studies a clan of spotted hyenas, Africa's second-largest carnivores, up closeand in a city of a hundred thousand inhabitants? In Among the Bone Eaters, Marcus Baynes-Rock takes us to the ancient city of Harar in Ethiopia, where the gey waraba (hyenas of the city) are welcome in the streets and appreciated by the locals for the protection they provide from harmful spirits and dangerous ',mountain' hyenas. They've even become a local tourist attraction.At the start of his research in Harar, Baynes-Rock contended with difficult conditions, stone-throwing children, intransigent bureaucracy, and wary hyena subjects intent on avoiding people. After months of frustration, three young hyenas drew him into the hidden world of the Sofi clan. He discovered the elements of a hyena's life, from the delectability of dead livestock and the nuisance of dogs to the unbounded thrill of hyena chase-play under the light of a full moon. Baynes-Rock's personal relations with the hyenas from the Sofi clan expand the conceptual boundaries of human-animal relations. This is multispecies ethnography that reveals its messy, intersubjective, dangerously transformative potential.