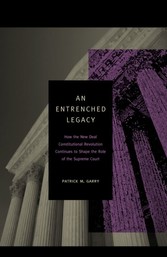 An Entrenched Legacy takes a fresh look at the role of the Supreme Court in our modern constitutional system. Although criticisms of judicial power today often attribute its rise to the activism of justices seeking to advance particular political ideologies, Patrick Garry argues instead that the Supreme Court's power has grown mainly because of certain constitutional decisions during the New Deal era that initially seemed to portend a lessening of the Court's power. When the Court retreated from enforcing separation of powers and federalism as the twin structural protections for individual liberty in the face of FDR's New Deal agenda, it was inevitably drawn into an alternative approach, substantive due process, as a means for protecting individual rights. This has led to many controversial judicial rulings, particularly regarding the recognition and enforcement of privacy rights. It has also led to the mistaken belief that the judiciary serves as the only protection of liberty and that an inherent conflict exists between individual liberty and majoritarian rule. Moreover, because the Court has assumed sole responsibility for preserving liberty, the whole area of individual rights has become highly centralized. As Garry argues, individual rights have been placed exclusively under judicial jurisdiction not because of anything the Constitution commands, but because of the constitutional compromise of the New Deal.During the Rehnquist era, the Court tried to reinvigorate the constitutional doctrine of federalism by strengthening certain powers of the states. But, according to Garry, this effort only went halfway toward a true revival of federalism, since the Court continued to rely on judicially enforced individual rights for the protection of liberty. A more comprehensive reform would require a return to the earlier reliance on both federalism and separation of powers as structural devices for protecting liberty. Such reform, as Garry notes, would also help revitalize the role of legislatures in our democratic system.