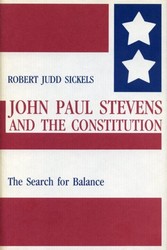 John Paul Stevens and the Constitution - The Search for Balance

John Paul Stevens and the Constitution - The Search for Balance

A good pragmatist's constitutional theory is inseparable from the legal disputes out of which it arises. John Paul Stevens's theory, that of deciding individual cases well instead of applying constitutional principles in the abstract to cases by category, thus lends itself to being studied in its natural, factual habitatin his own words, case by case. That's what this book does. In Chapter 1 Sickels distills Stevens's thoughts about law and appellate judging from his early writings and his opinions on the federal appeals court and, from 1975 to the present, on the U.S. Supreme Court. Stevens shows a concern for facts and consequences, for balancing, for deference to other decision makers unless they have been careless, for avoidance of undue complexity in judge-made law, and for drawing the line between clarity and oversimplification in legal rules. The next three chapters describe the application of Stevens's pragmatism to areas of constitutional law to which the Court and he especially have devoted most attention in recent years: First Amendment guarantees of freedom of expression and religion, the procedural guarantees (broadly, due process) of the Bill of Rights and the Fourteenth Amendment, and the equal protection of the laws. In each area, Stevens's special contributions are described. The concluding chapter places Stevens's judging in the contexts of the ongoing debate about the legitimacy of balancing, the ways of other moderates on the Court, and the voting records of the other members of the Court as a whole.Unique to this work is a meaningful introduction to the term moderate when applied to a Supreme Court justice, a definition based on careful analysis of the interplay of general rules and specific, case-by-case context. As such it is the very essence of Stevens's own way of judging and thus enables analysis of the work of a pragmatist on his own terms rather than through the distortions of a conflicting theory of law. John Paul Stevens is recognized as a jurist of unusual ability and one adheres to no ideological camp. While it is one thing to know he is neither rigid liberal nor a conservative, this book goes beyond the neither nor to accomplish the more difficult goal of defining what he is.This study is intended for scholars and students of the Supreme Court, the Constitution, the courts, and the American political process. Lawyers working before the Supreme Court, informed generalists, and courtwatchers generally, whether liberal, conservative, or neutral, will find much of interest here.