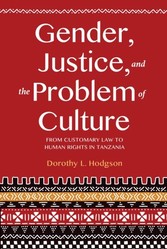 Gender, Justice, and the Problem of Culture - From Customary Law to Human Rights in Tanzania

Gender, Justice, and the Problem of Culture - From Customary Law to Human Rights in Tanzania

When, where, why, and by whom is law used to force desired social change in the name of justice? Why has culture come to be seen as inherently oppressive to women? In this finely crafted book, Dorothy L. Hodgson examines the history of legal ideas and institutions in Tanzania - from customary law to human rights - as specific forms of justice that often reflect elite ideas about gender, culture, and social change. Drawing on evidence from Maasai communities, she explores how the legacies of colonial law-making continue to influence contemporary efforts to create laws, codify marriage, criminalize FGM, and contest land grabs by state officials. Despite the easy dismissal by elites of the priorities and perspectives of grassroots women, she shows how Maasai women have always had powerful ways to confront and challenge injustice, express their priorities, and reveal the limits of rights-based legal ideals.