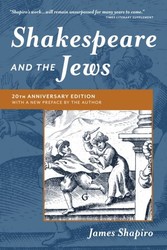 Shakespeare and the Jews

Shakespeare and the Jews

James Shapiros unvarnished look at how Jews were portrayed in Elizabethan England challenged scholars to recognize the significance of Jewish questions in Shakespeares day. From accounts of Christians masquerading as Jews to fantasies of settling foreign Jews in Ireland, Shapiros work delves deeply into the cultural insecurities of Elizabethans while illuminating Shakespeares portrayal of Shylock in The Merchant of Venice. In a new preface, Shapiro reflects upon what he failed to understand about intolerance when the book was first published.