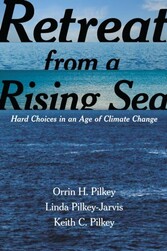 With its 28-foot storm surge and 174 mph winds, 2005s Hurricane Katrina was responsible for nearly 2,000 deaths and more than $100 billion in damage. The event was only a preview of what will soon hit coastal communities as climate change increases the power of storms that can lay waste to critical infrastructure, such as water-treatment and energy facilities, and create vast, irreversible pollution by decimating landfills and toxic-waste sites. This big-picture, policy-oriented book explains in gripping terms what rising oceans will do to coastal cities and the drastic actions we need to take now to remove vulnerable populations.The authors detail specific threats faced by Miami, New Orleans, New York, and Amsterdam. Aware of the overwhelming social, political, and economic challenges that would accompany effective action, they consider the burden to the taxpayer and the logistics of moving landmarks and infrastructure, including toxic-waste sites. They also show readers the alternative: thousands of environmental refugees, with no legitimate means to regain what they have lost. The authors conclude with effective approaches for addressing climate-change denialism and powerful arguments for changing U.S. federal coastal-management policies.