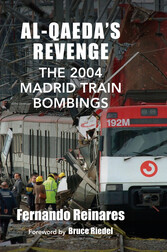 Al-Qaeda's Revenge tells the full story behind the events of March 11, 2004, when an al-Qaeda-inspired terrorist cell bombed commuter trains in Madrid, killing 191 people and injuring more than 1,800. The book's detailed narrative runs from the development of an al-Qaeda conspiracy in Spain through the 2007 trial and conviction of the 3/11 bombers, concluding with the thwarting in 2008 of an al-Qaeda bomb plot in Barcelona. Fernando Reinares's account draws on privileged access to judicial and intelligence documents and personal interviews with officials in Spain and elsewhere. His analysis ultimately links the Madrid bombing to members of al-Qaeda's senior leadership and connects the planning of 9/11 to the acts of 3/11.Al-Qaeda's Revenge is Spain's counterpart to The 9/11 Commission Report, a bestseller that has definitively showed al-Qaeda-and not, as initially suspected, the Basque separatist organization ETA-to be responsible for a horrific crime that fundamentally changed the way Spain and Europe have responded to the threat of modern terrorism.