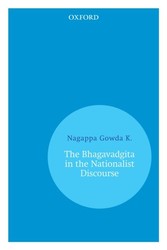 Bhagavadgita in the Nationalist Discourse

Bhagavadgita in the Nationalist Discourse

The Bhagavadgita has lent itself to several readings to defend or contest various views on life, morality, and metaphysics. This book explores the the role of the Bhagavadgita in the formation of nationalist discourse. It examines the ways in which the Gita became the central terrain of nationalist contestation, and the diverse ethico-moral mappings of the Indian nation. Focusing on Bankimchandra Chatterjee, Balgangadhar Tilak, Swami Vivekananda, Aurobindo Ghose, Mahatma Gandhi, Vinoba Bhave, and B.R. Ambedkar as the representatives of different strands of nationalist discourse, this volume probes their reflections on the Gita. The author also discusses with issues such as the relation between the nation and the masses, renunciation and engagement with the world, the ideas of equality, freedom, and common good, in the context of a nationalist discourse. He argues that the commentaries on this 'timeless' text opened up several possible understandings without necessarily eliminating one another.