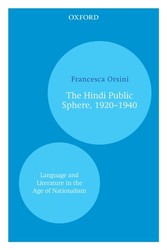 This book analyses how a language became the instrument with which the contours of a new nation were traced. Mapping the success of formalized Hindi in creating a regional public sphere in north India in the early twentieth century, the book explores the way many educated Indians, influenced by the British ideas and institutions, expressed interest in new concepts such as progress, unity, and a common cultural heritage. From the development of new codes and institutions to a language that helped to create space for argument and debate, the book gives an overview of the Hindi public sphere. Furthermore, it throws light on the work of Vasudha Dalmia about the nascent Hindi public sphere and brings to light how early-twentieth-century discourses on language, literature, gender, history, and politics form the core of the Hindi culture that exists today.