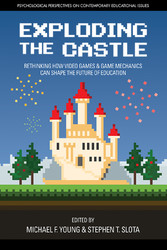 Lacking a digital crystal ball, we cannot predict the future of education or the precise instructional role games will have going forward. Yet we can safely say that games will play some role in the future of K?12 and higher education, and members of the games community will have to choose between being passive observers or active, progressive contributors to the complex and often political process of weaving together pedagogy, technology, and culture. This will involve agreeing that games—or, more specifically, game mechanics and the engagement in joyful learning that they engender—are not only critical for shaping online and classroom instruction but also the evolution of schooling as a whole. Likewise, it will involve a hard push beyond questions like “Are video games ‘good’ or ‘bad’ for education?” and “Are games ‘better’ for all students than traditional face?to?face teaching” to unpack how game experiences vary with individual learner goals as an interaction with the parameters of an educational environment. Simply put, we need to form a cohesive, compelling argument in support of the notion that games are entire learning ecologies in and of themselves.

This edited volume is designed to anchor collective thinking with respect to the value?added nature of games for learning and the complexities involved in player experience, narrative context, and environmental?player interactions. As could be expected, we are not interested in debates about “gamification,” game violence, individual game quality, and other topics that have become standard fare in extant games literature. Instead, we seek to emphasize issues of scalability, the induction of player goal adoption, affordances of game?based instructional environments, relationships between play and transfer, and the value of games as part of an ecopsychological worldview. As long?time contributors in a field that has made a habit of playing it safe—pun intended—we seek to bring the dialogue in a more nuanced and meaningful direction that will reach teachers, researchers, designers, and players alike.