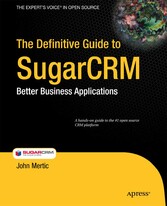 SugarCRM is a leading open-source customer relations management tool and development platform with nearly 5.5 million downloads, nearly 17,000 developers, and lots more users.
The Definitive Guide to SugarCRM is the first official SugarCRM book available to developers and users. This definitive book begins with a discussion of the SugarCRM platform components, namely MVC, Studio, Module Builder, authentication, and themes.
Next, you'll learn how to customize the modules SugarCRM comes with out of the box in an upgrade-safe manner. The text then presents an example application that a typical business might use and shows how to build it using SugarCRM, using both existing functionality as well as newly added functionality.


John Mertic is a software engineer at SugarCRM. He has worked on several areas of the product, namely the Import module, Sugar Wireless, database back ends, and currently themes. He graduated with a bachelor s degree in computer science from Kent State University and has several years of experience with PHP web applications. He has also contributed to many open source projects, most notably the PHP project, for which he is the creator and maintainer of the PHP Windows Installer. He has also authored several articles for PHP Architect, IBM developerWorks, and Apple Developer Connection.