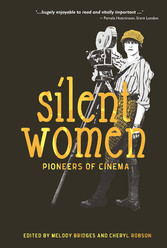 The first ever overview of women's contributions to the dawn of cinema looking at a variety of roles from writers and directors to film editors and critics.

Why have women such as Alice Guy-Blache, the creator of narrative cinema, been written out of film history? Why have so many women working behind the scenes in film been rendered invisible and silent for so long?

Silent Women, pioneers of cinema explores the incredible contribution of women at the dawn of cinema when, surprisingly, more women were employed across the board in the film industry than they are now.

It also looks at how women helped to shape the content, style of acting and development of the movie business in their roles as actors, writers, editors, cinematographers, directors and producers. In addition, we describe how women engaged with and influenced the development of cinema in their roles as audience, critics, fans, reviewers, journalists and the arbiters of morality in films. And finally, we ask when the current discrimination and male domination of the industry will give way to allow more women access to the top jobs. In addition to its historical focus on women working in film during the silent film era, the term silent also refers to the silencing and eradication of the enormous contribution that women have made to the development of the motion picture industry.

'The surprise of the essays collected here is their sheer volume in every corner of a business apparently better able to accommodate female talent then than now..' Danny Leigh, Financial Times, July 2016

' It's a fascinating journey into the untold history of a largely lost era of film..' Greg Jameson, Entertainment Focus, March 2016

'This book shows how women's voices were heard and helped create the golden age of silent cinema, how those voices were almost eradicated by the male-dominated film industry, and perhaps points the way to an all-inclusive future for global cinema..' Paul Duncan, Film Historian

'Inspirational and informative, Silent Women will challenge many people's ideas about the beginnings of film history. This fascinating book roams widely across the era and the diverse achievements and voices of women in the film industry. These are the stories of pioneers, trailblazers and collaborators - hugely enjoyable to read and vitally important to publish.' Pamela Hutchinson, Silent London

'Every page begs the question - how on earth did these amazing women vanish from history in the first place?  I defy anyone interested in cinema history not to find this valuable compendium a must-read. It's also a call to arms for more research into women's contribution and an affirmation of just how rewarding the detective work can be.' Laraine Porter, Co-Artistic Director of British Silent Film Festival

'An authoritative and illuminating work, it also lends a pervasive voice to the argument that discrimination and not talent is the barrier to so few women occupying the most prominent roles within the industry.' Jason Wood, Author and Visiting Professor at MMU

'I was amazed to discover just how crucially they were involved from not just in front of the camera but in producing, directing, editing and much, much more. An essential read.' Neil McGlone. The Criterion Collection