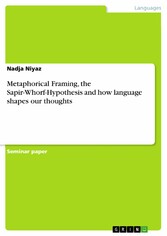 Metaphorical Framing, the Sapir-Whorf-Hypothesis and how language shapes our thoughts

Metaphorical Framing, the Sapir-Whorf-Hypothesis and how language shapes our thoughts

Seminar paper from the year 2017 in the subject Speech Science / Linguistics, grade: 2,3, LMU Munich (Anglistik), language: English, abstract: In this paper I will first explain what the term Metaphor means and highlight the claim, that it is not only a poetic device, but that conceptual metaphors are pervasive in our everyday life and have a brief look at the Sapir-Whorf-Hypothesis. In the second part I will explain in detail what Metaphorical Framing is, how it works and what the pros and cons of Metaphorical Framing are. To that end I am going to include two series of experiments concerning metaphorical framing of crime and climate change from Thibodeau and Boroditsky and Wolsko et al. giving a short overview about their findings. Throughout time the metaphor has always been an object of interest and one of the reasons might be, that our mind 'is a connecting organ, it works only by connecting and it can connect any two things in an indefinitely large number of different ways' (Charteris-Black 2014). So, as Lakoff and Johnson argue, metaphors are eminent in our brains, the way our conceptual system and therefore our mind works, how we think, argue, and reason. And exactly because of that, our brain can also be manipulated by metaphor. It is not only a linguistic concept, but an important influence on how we think and behave. Headlines like 'Why won't the world tackle the refugee crisis?' or 'Two summits this week will try to address the 65 million displaced and 20 million in danger. But they are under fire before talks have even begun' (McVeigh and Townsend), seem to be 'normal' to us, when indeed they are heavily loaded with negative connotations and war metaphors. This use of metaphors to influence people's way of thinking is called metaphorical framing.