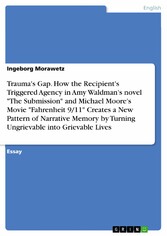 
Essay from the year 2016 in the subject American Studies - Comparative Literature, grade: 1,3, Leiden University, language: English, abstract: This paper argues that, contrary to politics and news coverage, both Amy Waldman's novel 'The Submission' and Michael Moore's movie 'Fahrenheit 9/11' give the audience the chance to not rationally understand, but to emotionally recognize the 'other' as grievable within the representational gap that is created through the narrated relation of the 'I' to the 'face'. This emotionally recognized narrative of the other can become part of the narrative memory into which traumatic recall should be turned, and therefore also is more successful in the overcoming of trauma's gap than the public medial narrative. After the attacks on the World Trade Center on September 11th, 2001, two major narratives emerged: The trauma of the US citizens and the defense against the evil other. Both are connected on a psychological and political level. The 'us vs. them' dichotomy, the traumatized good Americans against the evil Muslims, existed before the attacks and was reinforced afterwards. The trauma of the individual American was partly instrumentalized and militarized for political purposes, leading to a perception of the Muslim other not only as evil, but also as ungrievable. Judith Butler discusses the notion of the 'ungrievable other' in her publication Precarious Life. She sees the attacks as a chance to change the political and individual dichotomy of 'us' and 'the other', and therefore of grievable and ungrievable lives. Butler argues that the 'recognition of the other' (Butler 34-44) could prevent further terrorist attacks and wars by pursuing the notion of a two-sided vulnerability. By using Levinas' theory of the 'face' she shows how failed representation of and failed identification with the other can lead to experiencing it as grievable by creating a difference or a gap in the relation of it to the self, synonymously the human-being that is recognized as such, the first-personnarrative, the 'I' or the 'us'. Amy Waldman's novel 'The Submission' and Michael Moore's movie 'Fahrenheit 9/11' treat the other in particular narrative, compositional and structural ways that create this gap. Both works are perceived as in between fiction and non-fiction and were controversially discussed, thus creating an uncertainty in readers and viewers about their expectations, and putting them into a state of agency and action by demanding an opinion.