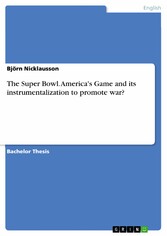 The Super Bowl. America's Game and its instrumentalization to promote war?

The Super Bowl. America's Game and its instrumentalization to promote war?


Bachelor Thesis from the year 2016 in the subject English Language and Literature Studies - Culture and Applied Geography, grade: 2,3, University of Würzburg, language: English, abstract: The first chapters provide a summary of the game's history, its development into a professional sport and a brief introduction to how it is played. Those are followed by a condensed, but nevertheless meaningful chapter about how American Football rose above Baseball as America's number one sport. The structure of the subsequent chapters is as follows: Firstly, they introduce the reader to the long tradition of the Army versus Navy game, followed by an elaboration on the vocabulary and terminology used to talk about American Football. Secondly, the Super Bowl's pregame show, its development, its impact on national symbols and the nation will be discussed. Finally, the paper illustrates the game's cultural impact by means of a significant example and it provides the reader a critical analysis of its further development. 'The truth is the Super Bowl long ago became more than just a football game. It's part of our culture, like turkey at Thanksgiving and lights at Christmas, and like those holidays - beyond their meaning - a factor in our economy.' stated Bob Schieffer, news anchor and journalist, on Super Bowl Sunday 2010. Indeed, the Super Bowl is nowadays much more than just the championship game of the National Football league. It has become a 'major religious festival for American culture, for the event signals a convergence of sports, politics, and myth' (Price quoted in Dougherty). To me, the most striking feature of the Super Bowl has always been the ubiquitous presence of all the service men and women. They regularly framed the field and the actor who performed the Star-Spangled Banner and were accompanied by a fighter jet flyover once the anthem was sung. I always had the feeling that the military acted as the co-host of the event and that the Super Bowl was, figuratively spoken, under its protection. Those observations altered my view of the game and led me during my extensive research, resulting in the insight that American Football and the military share a rich heritage. In this paper, I will show the reader that the military presence during football games is far from being coincidental and how warlike the game really is.