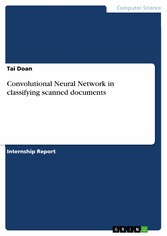 Internship Report from the year 2016 in the subject Computer Science - Applied, University of Science and Technology of Hanoi, course: Internship, language: English, abstract: In this project, I created and augmented a dataset from a number of given images to train and test convolutional neural network which is used to classify five classes of images of scanned documents. In order to generate the dataset, some image processing techniques were applied such as sliding-window, rotating, flipping and pyramid-sizing. The result of this phase is a set of images having same size 244x224x3. These images after being labeled were divided into three dataset for training, validating and testing the network. The network is a simple convolution neural network which is also called LeNet. It has three convolutional layers and one fully connected layer. After being trained and validated, the best state of the network was pointed out and tested on the testing dataset and some real images. The result showed that the LeNet was able to classify images of documents in a pretty high accuracy. At the end of the project, I modified the network and discussed the affect that those changes had on the network with the purpose of creating another similar network which can perform better than the original one. The result proved that it worked a little better than its original version.