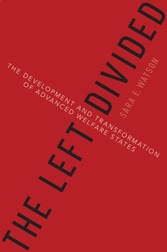 Left Divided: The Development and Transformation of Advanced Welfare States

Left Divided: The Development and Transformation of Advanced Welfare States

Why do some countries construct strong systems of social protection, while others leave workers exposed to market forces? In the past three decades, scholars have developed an extensive literature theorizing how hegemonic social democratic parties working in tandem with a closely-allied trade union movement constructed models of welfare capitalism. Indeed, among the most robust findings of the comparative political economy literature is the claim that the more political resources controlled by the left, the more likely a country is to have a generous, universal system of social protection. The Left Divided takes as its starting point the curious fact that, despite this conventional wisdom, very little of the world actually approximates the conditions identified by mainstream scholarship for creating universal, generous welfare states. In most countries outside of northern Europe, divisions within the left-within the labor movement, among left parties, as well as between left parties and a divided union movement-are a defining feature of politics. The Left Divided, in contrast, focuses on the far more common and deeply consequential situation where intra-left divisions shape the development of social protection. Arguing that the strength and position taken by the far left is an important and overlooked determinant of social protection outcomes, the book presents a framework for distinguishing between different types of left movements, and analyzes how the distribution of resources within the left shapes party strategies for expanding social protection in theoretically unanticipated ways. To demonstrate the counterintuitive effects of having the far-left control significant political resources, Watson combines in-depth case studies of Iberia with cross-national analysis of OECD countries and qualitative comparative analyses of other divided lefts.