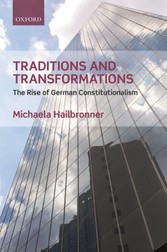 Traditions and Transformations: The Rise of German Constitutionalism

Traditions and Transformations: The Rise of German Constitutionalism

German constitutionalism has gained a central place in the global comparative debate, but what underpins it remains imperfectly understood. Its distinctive conception of the rule of law and the widespread support for its powerful Constitutional Court are typically explained in one of two ways: as a story of change in reaction to National Socialism, or as the continuation of an older nineteenth-century line of constitutional thought that emphasizes the function ofconstitutional law as a constraint on state power. But while both narratives account for some important features, their explanatory value is ultimately overrated.This book adopts a broader comparative perspective to understand the rise of the German Constitutional Court. It interprets the particular features of German constitutional jurisprudence and the Courts strength as a reconciliation of two different legal paradigms: first, a hierarchical legal culture as described by Mirjan Damaska, building on Max Weber, as opposed to a more co-ordinate understanding of legal authority such as prevails in the United States, and secondly, the turn towards atransformative understanding of constitutionalism, as it is today most often associated with countries such as South Africa and India.Using post-war legal history and sociological and empirical research in addition to case law, this book demonstrates how German constitutionalism has harmonized the frequently conflicting demands of these two legal paradigms, resulting in a distinctive type of constitutional reasoning, at once open, pragmatic, formalist, and technical, which this book labels Value Formalism. Value Formalism, however, also comes with serious drawbacks, such as a lack of institutional self-reflection in theCourts jurisprudence and a closure of constitutional discourse to laymen, whom it excludes from the realm of legitimate interpreters.