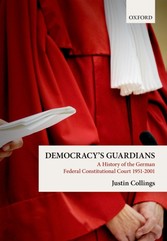 Democracys Guardians: A History of the German Federal Constitutional Court, 1951-2001

Democracys Guardians: A History of the German Federal Constitutional Court, 1951-2001

In its six-decade history, the German Federal Constitutional Court has become one of the most powerful and influential constitutional tribunals in the world. It has played a central role in the establishment of liberalism, democracy, and the rule of law in post-war West Germany, and it has been a model for constitutional tribunals in many other nations. The Court stands virtually unchallenged as the most trusted institution of the German state. Written as a completehistory of the German Federal Constitutional Court from its founding in 1951 up into the twenty-first century, this book explores how the court became so powerful, and why so few can resist its strength. Founded in 1951, the Court took root in a pre-democratic political culture. The Courts earliest contributions were to help establish liberal values and fundamental rights protection in the young Federal Republic. The early Court also helped democratize West German politics by reinforcing rights of speech and information, affirming the legitimacy of parliamentary opposition, and checking executive power. In time, as democratic values took hold in the country at large, the Courts early role innurturing liberalism and democracy led many West Germans to view the Court not as a constraint on democracy, but as a bulwark of democracys preconditions. In later decades, the Court played a stabilizing role - mediating political conflicts and integrating societal forces. Citizens disenchanted withpartisan politics looked to the Court as a guardian of enduring values and a source of moral legitimacy. Through a comprehensive narrative of the Courts remarkable rise and careful analysis of its periodic crises, the work carefully dissects the success of the Court, presenting not only a traditional work of legal history, but a public history - both political and societal - as well as a doctrinal and jurisprudential account. Structured around the Courts major decisions from 1951 to 2001, the book examines popular and political reactions to those decisions, drawing heavily on newspaper accountsof major judgments and material from the archives of individual politicians and judges. The result is an impressive case study of the global phenomenon of constitutional justice.