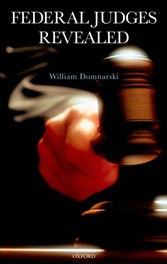 The power and influence of the federal judiciary has been widely discussed and understood. And while there have been a fair number of institutional studies-studies of individual district courts or courts of appeal--there have been very few studies of the judiciary that emphasize the judges themselves. Federal Judges Revealed considers approximately one hundred oral histories of Article Three judges, extracting the most important information, and organizing it around a series of presented topics such as How judges write their opinions and What judges believe make a good lawyer.