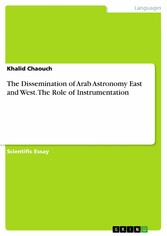 The Dissemination of Arab Astronomy East and West. The Role of Instrumentation

The Dissemination of Arab Astronomy East and West. The Role of Instrumentation


Scientific Essay from the year 2016 in the subject Orientalism / Sinology - Arabistic, , language: English, abstract: Reconstructing the history of Arab astronomy will only be possible by the study and analysis of both its texts - old and new - and its different instruments, a systematic process that will certainly shed more light on the different mechanisms and phases of the continuous evolution of this science. The translation of Greek astronomy works into Arabic in the 8th and 9th centuries and the different implications that it represents are issues that need further investigation, especially as regards the concept of astronomy dissemination among common people. The aim of this paper is to bring into prominence the effects of astronomy popularization that came as a consequence of the movement of translation and of the ensuing wave of instrumentation and commentating works.