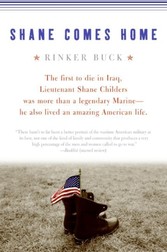 On March 21, 2003, while leading a rifle platoon into combat, Marine Lieutenant Shane Childers became the first combat fatality of the Iraq War. In this gripping, beautifully written personal history, award-winning writer Rinker Buck chronicles Shane's death and his life, exploring its meaning for his family, his fellow soldiers, and the country itself. It is the story of an intelligent, gifted soldier who embodied the soul of today's all-volunteer warrior class; of the town of Powell, Wyoming, which had taken Shane into its heart; and of the Marine detail sent to deliver the news to the Childers family and the extraordinary connection that formed between them.At once an inspiring account of commitment to the military and a moving story of family and devotion, Shane Comes Home rises above politics to capture the life of a remarkable young man who came to symbolize the heart of America during a difficult time.