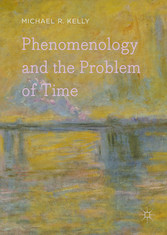 Phenomenology and the Problem of Time

Phenomenology and the Problem of Time

This book explores the problem of time and immanence for phenomenology in the work of Edmund Husserl, Martin Heidegger, Maurice Merleau-Ponty, and Jacques Derrida. Detailed readings of immanence in light of the more familiar problems of time-consciousness and temporality provide the framework for evaluating both Husserl's efforts to break free of modern philosophy's notions of immanence, and the influence Heidegger's criticism of Husserl exercised over Merleau-Ponty's and Derrida's alternatives to Husserl's phenomenology. Ultimately exploring various notions of intentionality, these in-depth analyses of immanence and temporality suggest a new perspective on themes central to phenomenology's development as a movement and raise for debate the question of where phenomenology begins and ends.


Michael R. Kelly is Assistant Professor of Philosophy at The University of San Diego, USA. He is editor of Bergson and Phenomenology (2010), and has published articles on the topic of time and time-consciousness in the Journal of the British Society for Phenomenology and American Catholic Philosophical Quarterly.