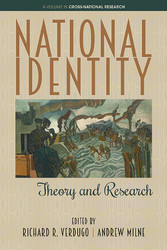 While controversy and debate are healthy exercises in any science, at some point order must be established if science is to proceed. The present volume is based on the idea that national identity is an ideal-type concept; it does not completely capture reality, but is used for analytic purposes. In addition, rather than focusing on these theoretical debates, we pursue research with the idea that results from research will contribute to the field of national identity. Three areas of national identity are discussed: theoretical, national, and individual. Two chapters focus on the major theories about national identity, provide critiques, and make suggestions about the topic. In section two, six chapters provide case studies of national identity on Scotland, Ireland, Russia, Bosnia-Herzegovina, Germany, and France. In section three, two case studies focus on immigrants and the challenges they face in forming their identities, especially identifying with their host countries—Belgium, and the United Kingdom.

Several important conclusions may be gleaned from the contributions of the present volume. To begin with, while national identity is a slippery concept, if the field wishes to move beyond debate about fundamentals, it would be well advised to view the concept as an ideal-type as suggested by the great German scholar, Max Weber. Secondly, the case studies included in the present volume indicate that national identity is not only based on ethnicity and culture, but on such external factors as governance regimes and their changes, economic crises, wars and other forms of aggressive activity, and social demographic changes in a population. These factors affect a population at the national level. For immigrants at the individual level, developing national identity is greatly affected by four interrelated factors: 1) the degree to which they are accepted by members of the host society; 2) immigrants’ language skills and physical appearances; 3) how well they are able to balance their host national identity, their ethnic identity, and acceptance of their native country; 4) and their generational status. Generally, at the national and individual levels, context and circumstances matter in developing national identity.