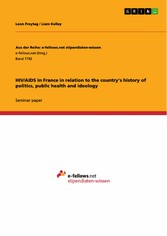 HIV/AIDS in France in relation to the country's history of politics, public health and ideology

HIV/AIDS in France in relation to the country's history of politics, public health and ideology

Seminar paper from the year 2016 in the subject Sociology - Medical Care, grade: 1,0, , language: English, abstract: This essay will provide a basis for a thick description of the AIDS issue in France. We describe the history of politics surrounding AIDS, the conception of Public Health in France, French ideologies and the relationship to stigma and language. All of these are of particular salience when addressing an issue like AIDS, which is a non-linear issue in that it cannot be attributed to any one cause. France has the highest number of HIV-positives in all Europe. The number of people living with HIV/AIDS in France has steadily increased in the last decade from 120,000 in 2005 to about 150.000 in 2015 (indexmundi, 2015). Its prevalence rate, 0.4%, is also relatively high compared to the rest of Europe, e.g. 0.2% in the UK and 0.1% in Germany. Every year between 1500-2000 people die of HIV/AIDS in France (Ibid). This is only about 1% of the total number of HIV-positives, showing that France does reasonably well in providing ART (anti-retroviral treatment). Rather they have been facing difficulties regarding prevention. The rate of newly diagnosed HIV infections has been decreasing, but only slowly, from 9.5 per 100 000 in 2005 to 6.3 per 100 000 in 2011 (WHO, 2011). It is striking that more than a third of seropositives remain undiagnosed in France (Supervie et al., 2014).