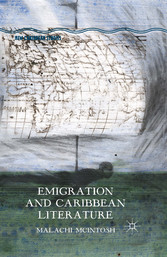 During and after the two World Wars, a cohort of Caribbean authors migrated to the UK and France. Dissecting writers like Lamming, Césaire, and Glissant, McIntosh reveals how these Caribbean writers were pushed to represent themselves as authentic spokesmen for their people, coming to represent the concerns of the emigrant intellectual community.

Malachi McIntosh is a Lecturer of English at the University of Cambridge, UK.