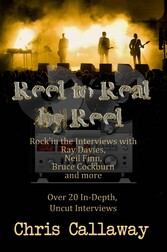 Reel to Real by Reel

Reel to Real by Reel

Books that blend explorations of pop music with a coming-of-age memoir have become bestsellers for authors like Nick Hornby and Chuck Klosterman. I take the concept one step further in my proposed book, 'Reel to Real by Reel,' which features uncut interviews--collected during my days as a music journalist. As the interviews are arranged in chronological order, the book offers two unique reading experiences at once: a look at the uncensored thoughts of touring musicians; and the life story of the author who conducted the interviews: a music fan since birth, a performing musician in his own right, a Christian who often struggles with questions about faith, and an OCD sufferer who finds some relief in music. • Robyn Hitchcock • Glenn Tilbrook (Squeeze) • Mike Peters (the Alarm) • Charlie Gillingham (Counting Crows) • Buddy Cage (Bob Dylan, Jerry Garcia, Stir Fried) • Bruce Cockburn • Sean Kelly (the Samples) • Bill Mallonee (Vigilantes of Love) • Tim Finn • Dug Pinnick (King's X) • Alex Lifeson (Rush) • Matt Slocum (Sixpence None the Richer) • Neil Finn (Crowded House) • Michael Sweet (Stryper) • Steve Taylor • Ben Gibbard (Death Cab for Cutie) • Ray Davies (the Kinks) • Jon Auer (the Posies)

Chris Callaway has loved music since he was able to crawl on the red shag carpet in his parents' home and stare at his dad's reel-to-reel tape machine. He started playing guitar at the age of 12, soon switched to electric bass, and has since performed in many local bands in his native New England and in the Denver area. While in these musical ensembles, Chris handled the majority of the booking, publicity, marketing and management duties. He also co-managed musical artists with veteran manager Mark Bliesener. In 1994, Chris started writing professionally as a freelance music journalist and has written for publications including the Boulder Weekly, Westword, HM and Relevant. Chris moved to Nashville in 1997 after graduating from Colorado Christian University with a BA in communications. He worked in marketing and publicity for two years with a couple different record labels; one was owned by former Prince and the Revolution guitarist Dez Dickerson, and the other was owned by late country music legend Buddy Killen. After two years entrenched in the music business, Chris moved back to Denver, a place he now calls home.