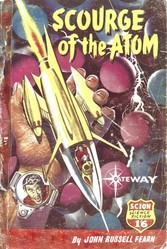 Scourge of the Atom

Scourge of the Atom

Doctor Martin Bond had an intriguing theory. By re-creating on Earth the prototype of a section of Mars, equivalent in atmosphere, aridity and every other scientific detail he hoped to attune his own mind and body to Martian conditions. Not only did he hope to learn what had happened to Mars' civilisation, but in doing he also believed the could recapture the past and its carefully concealed secrets.