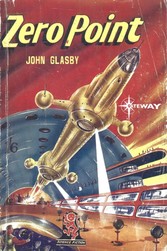 Over the long years, ships of the Interplanetary Confederation had scoured the empty wastes surrounding Sol, searching desperately for a sister planet, a companion for the isolated worlds of the Solar System. Of the ships that were sent out, many returned. But always the answer was the same. There were no planets! The worlds of Sol were alone in the Great Dark that swirled across the boundless heavens. It was not until Steve Rane and Nick Brodine, in the Exploratory Ship Vega, reached across the yawning gulf of light years to Sirius, that they found the strange planet that rotated in its complicated orbit around the twin sun. It was an event transcending all others. A discovery that plunged the planets of Sol into the greatest race of all time. For whoever controlled the alien planet, controlled the Solar System. And away from the watchful eye of the IPC it would be possible to build the greatest space armada in history and attack the Interplanetary Confederation without warning. To Steve Rane, the order came from Earth Central. Zero Point has been set for three months hence. The ship of Jupiter must not reach the new planet first.