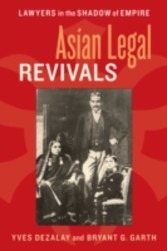 Asian Legal Revivals - Lawyers in the Shadow of Empire

Asian Legal Revivals - Lawyers in the Shadow of Empire

More than a decade ago, before globalization became a buzzword, Yves Dezalay and Bryant G. Garth established themselves as leading analysts of how that process has shaped the legal profession. Drawing upon the insights of Pierre Bourdieu, Asian Legal Revivals explores the increasing importance of the positions of the law and lawyers in South and Southeast Asia. Dezalay and Garth argue that the current situation in many Asian countries can only be fully understood by looking to their differing colonial experiences-and in considering how those experiences have laid the foundation for those societies' legal profession today. Deftly tracing the transformation of the relationship between law and state into different colonial settings, the authors show how nationalist legal elites in countries such as India, Indonesia, Malaysia, the Philippines, Singapore, and South Korea came to wield political power as agents in the move toward national independence. Including fieldwork from over 350 interviews, Asian Legal Revivals illuminates the more recent past and present of these legally changing nations and explains the profession's recent revival of influence, as spurred on by American geopolitical and legal interests.