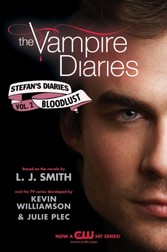 A new beginning . . . When Stefan Salvatore's first love turned him into a vampire, his worldand his soulwere destroyed. Now he and his brother, Damon, must flee their hometown, where they risk being discovered . . . and killed.The brothers head to New Orleans, looking for safe haven. But the city is more dangerous than they ever imagined, full of other vampiresand vampire hunters. Will Stefan's eternal life be forever damned?Based on the popular CW TV show inspired by the bestselling novels, Stefan's Diaries reveals the truth about what really happened between Stefan, Damon, and Katherineand how the Vampire Diaries love triangle began.