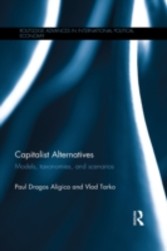 The book's objective is to explore the challenge of thinking methodically - in a theoretically and empirically informed way - about alternative forms of capitalism. What are the most effective ways to conceptualize the existing models of capitalism that have captured the public imagination and are currently floating around in the public debate? How can one mobilize empirical analysis and theory in thinking about the realm of possibilities and about the future of economic order, but avoid the twin perils of scientism and historicism? This book is an attempt to respond to these and related challenges.First, it delves into the substantive aspect of the debate, taking a closer look at a set of particular forms and models of capitalism that are currently discussed both in mass media and in academic circles as plausible, or at least possible, alternatives to the status quo: Crony, State, Regulatory, and Entrepreneurial Capitalisms. By elaborating and clarifying those models, it engages in a heuristic exercise that leads to a better understanding of the task of conceptualizing and assessing, in a theoretically informed way, the diversity of forms of capitalism.Second, the book takes a step further, looking at the epistemic, theoretical and methodological dimensions of the discussion: What is involved, more precisely, in our classifying and theorizing of capitalist systems and their historical evolution? What is the epistemic basis for building plausible conjectures about the future evolution of an economic system? What are the logical and methodological parameters of our endeavors that deal with economic systems, or with the problem of continuity and change in comparative economic systems? Offering an original approach to the problem of alternative forms of capitalism, this book will be of great interest to scholars working in the field of comparative political economy.