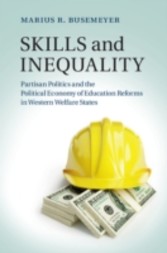 Skills and Inequality studies the political economy of education and training reforms from the perspective of comparative welfare state research. Highlighting the striking similarities between established worlds of welfare capitalism and educational regimes, Marius R. Busemeyer argues that both have similar political origins in the postwar period. He identifies partisan politics and different varieties of capitalism as crucial factors shaping choices about the institutional design of post-secondary education. The political and institutional survival of vocational education and training as an alternative to academic higher education is then found to play an important role in the later development of skill regimes. Busemeyer also studies the effects of educational institutions on social inequality and patterns of public opinion on the welfare state and education. Adopting a multi-method approach, this book combines historical case studies of Sweden, Germany, and the United Kingdom with quantitative analyses of macro-level aggregate data and micro-level survey data.