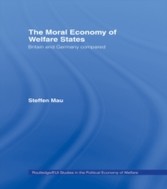 This book investigates why people are willing to support an institutional arrangement that realises large-scale redistribution of wealth between social groups of society. Steffen Mau introduces the concept of 'the moral economy' to show that acceptance of welfare exchanges rests on moral assumptions and ideas of social justice people adhere to. Analysing both the institution of welfare and the public attitudes towards such schemes, the book demonstrates that people are neither selfish nor altruistic, rather they tend to reason reciprocally.