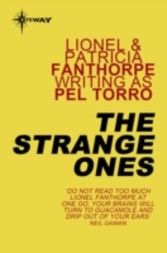 An itinerant French mercenary stumbles into the Valley of the Kings, driven by thirst and crazed by the eastern sun, he crawls through a crevice in an ancient wall... The papyrus roll he found contained weird hieroglyphics, an owl, a bolted door, an eagle, an axe and, strangest of all, Xerefu and Akeru - the lions of Yesterday and Today. The scroll found its way to Paris. The year was 1798. The Terror was born. Behind the welter of blood that was revolution, older, darker, more sinister forces were at work. The Revolution was only a means to an end... only a symptom of a deadlier peril, a terror behind the Terror. Ancient Egyptian power was stronger than the guillotine...