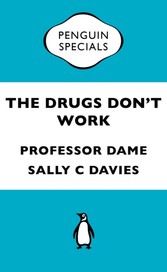 The Drugs Don't Work - A Penguin Special by Professor Dame Sally Davies, the Chief Medical Officer for England'If we fail to act, we are looking at an almost unthinkable scenario where antibiotics no longer work and we are cast back into the dark ages of medicine where treatable infections and injuries will kill once again' David Cameron, Prime MinisterResistance to our current range of antibiotics is the new inconvenient truth. If we don't act now, we risk the health of our parents, our children and our grandchildren.Antibiotics add, on average, twenty years to our lives. For over seventy years, since the manufacture of penicillin in 1943, we have survived extraordinary operations and life-threatening infections. We are so familiar with these wonder drugs that we take them for granted. The truth is that we have been abusing them: as patients, as doctors, as travellers, in our food.No new class of antibacterial has been discovered for twenty six years and the bugs are fighting back. If we do not take responsibility now, in a few decades we may start dying from the most commonplace of operations and ailments that can today be treated easily.This short book, which will be enjoyed by readers of An Inconvenient Truth by Al Gore and Bad Pharma by Ben Goldacre, will be the subject of a TEDex talk given by Professor Dame Sally Davies at the Royal Albert Hall.Professor Dame Sally C. Davies is the Chief Medical Officer for England and the first woman to hold the post. As CMO she is the independent advisor to the Government on medical matters with particular interest in Public Health and Research. She holds a number of international advisory positions and is an Emeritus Professor at Imperial College.Dr Jonathan Grant is a Principal Research Fellow and former President at RAND Europe, a not-for-profit public policy research institute. His main research interests are on health R&D policy and the use of research and evidence in policymaking. He was formerly Head of Policy at The Wellcome Trust. He received his PhD from the Faculty of Medicine, University of London, and his B.Sc. (Econ) from the London School of Economics.Professor Mike Catchpole is an internationally recognized expert in infectious diseases and the Director of Infectious Disease Surveillance and Control at Public Health England. He has coordinated many national infectious disease outbreak investigations and is an advisor to the European Centre for Disease Prevention and Control. He is also a visiting professor at Imperial College.