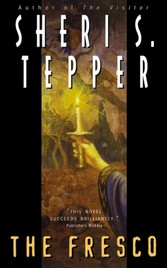 The bizarre events that have been occuring across the United States -- unexplained "oddities" tracked by Air Defense, mysterious disappearances, shocking deaths -- seem to have no bearing on Benita Alvarez-Shipton's life. That is, until the soft-spoken thirty-six-year-old bookstore manager is approached by a pair of aliens asking her to transmit their message of peace to the powers in Washington. An abused Albuquerque wife with low self-esteem, Benita has been chosen to act as the sole liaison between the human race and the Pistach, who have offered their human hosts a spectacular opportunity for knowledge and enrichment.But ultimately Benita will be called upon to do much more than deliver messages -- and may, in fact, be responsible for saving the Earth. Because the Pistach are not the only space-faring species currently making their presence known on her unsuspecting planet. And the others are not so benevolent.