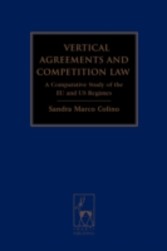 This book focuses on the current legal framework for vertical agreements in the EU and the US. Over the last ten years, antitrust rules governing these agreements have undergone thorough reform. In the EU, the old sector-specific block exemptions were replaced by Regulation 2790/99, applicable to all sectors of the economy. In addition, changes introduced to the procedural rules have led to the decentralisation of Article 81(3) and the removal of the notification requirement. In like manner, in the US the Supreme Court has gradually taken vertical restraints out of the per se illegality rule. What Sylvania achieved in placing non-price vertical restraints under the rule of reason in the late 1970s, the Khan judgment did for maximum resale price maintenance in 1997, whilst most recently and most significantly in 2007 the Leegin case followed suit for minimum resale price maintenance.The book is divided into four chapters. The first chapter considers the 'double nature' of vertical agreements and the regulatory dilemma. The second chapter explores the most influential economic theories underpinning current regulatory frameworks, and how these theories shape antitrust policy. The third chapter questions the adequacy of the current economic analysis in recent EU and US legislation and court decisions. The fourth chapter analyses how this maturing economic analysis can be reconciled with what commentators and regulators have identified as a key role for competition policy, redressing assumed imbalances between dealers and manufacturers. The author concludes by querying the prevailing logic of protecting sectoral interests above the competitive process.