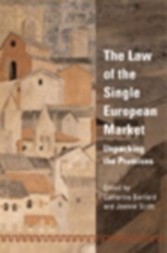 Law of the Single European Market - Unpacking the Premises

Law of the Single European Market - Unpacking the Premises

This edited collection explores the legal foundations of the single market project in Europe,and examines the legal concepts and constructs which underpin its operation. While an apparently well-trodden area of EU law, such is the rapid evolution of the European Court's case law that confusion persists as to the meaning of core concepts. The approach adopted is a thematic one, with each theme being explored in the context of the different freedoms. The themes covered include discrimination, horizontality, mutual recognition, market access, pre-emption and harmonization, enforcement, mandatory requirements, flexibility, subsidiarity and proportionality. Separate chapters explore the link between competition law and the single market, the rapidly evolving case law on capital, and the external dimension of the single market. Contributors also address the WTO dimension, and its important implications for the single market project in Europe.