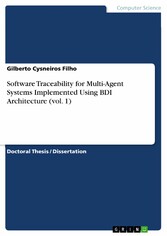 Doctoral Thesis / Dissertation from the year 2011 in the subject Computer Science - Software, City University London, course: Computer Science, language: English, abstract: The development of multi-agent software systems is considered a complex task due to (a) the large number and heterogeneity of documents generated during the development of these systems, (b) the lack of support for the whole development life-cycle by existing agent-oriented methodologies requiring the use of different methodologies, and (c) the possible incompleteness of the documents and models generated during the development of the systems. In order to alleviate the above problems, in this thesis, a traceability framework is described to support the development of multi-agent systems. The framework supports automatic generation of traceability relations and identification of missing elements (i.e., completeness checking) in the models created during the development life-cycle of multi-agent systems using the Belief-Desire-Intention (BDI) architecture. Traceability has been recognized as an important activity in the software development process. Traceability relations can guarantee and improve software quality and can help with several tasks such as the evolution of software systems, reuse of parts of the system, validation that a system meets its requirements, understanding of the rationale for certain design decisions, identification of common aspects of the system, and analysis of implications of changes in the system. The traceability framework presented in this thesis concentrates on multi-agent software systems developed using i* framework, Prometheus methodology, and JACK language. Here, a traceability reference model is presented for software artefacts generated when using i* framework, Prometheus methodology, and JACK language. Different types of relations between the artefacts are identified. The framework is based on a rule-based approach to support automatic identification of traceability relations and missing elements between the generated artefacts. Software models represented in XML were used to support the heterogeneity of models and tools used during the software development life-cycle. In the framework, the rules are specified in an extension of XQuery to support (i) representation of the consequence part of the rules, i.e. the actions to be taken when the conditions are satisfied, and (ii) extra functions to cover some of the traceability relations being proposed and completeness checking of the models. A prototype tool has been developed to illustrate and evaluate the work.