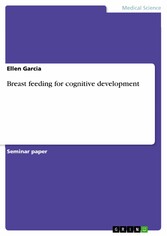 Seminar paper from the year 2012 in the subject Medicine - Pediatrics, grade: B, The University of Liverpool, language: English, abstract: As usual, traditions that have been followed for long always form subjects of debate. Traditionally women used to breast feed their infants till the next child is born or at least for a year without any complain. The situation has however changed as mothers now opt for infant formula readily available in our markets. This has raised a serious issue of debate as nutritionists and pediatrics as a whole still recommend six months exclusive breast feeding while manufactures of these products are capitalizing on the fact that today's mothers are more busy thus has little time for their babies. Breast feeding had traditionally been associated with the development of strong immune system for babies, the single most reason why pediatrics always recommend six months exclusive breast feeding period to mothers. Studies currently have tried to address other reasons why breast feeding should be treated with importance. One of this reasons that has received renowned attention is the connection between breastfeeding and cognitive development. The importance of breast feeding for cognitive development was first explored by Hoefer and Hardy (1929) when they carried out a study on 'later development of breast fed and artificially fed infants.' Since then this topic has been researched by many scholars. While most scholars argue that breast fed children ranks high on clinical studies done on cognitive function, others argue that these perceived differences can be attributed to other factors such as maternal education or socio-economic factors (Anderson, 1999). The development of cognitive functions in infants is of course a more complex process being influenced by many factors including genetics as well as environmental factors. The role played by nutrition an in this case breastfeeding cannot be under estimated either. This piece of work therefore seeks to address the role played by breast feeding in cognitive development.