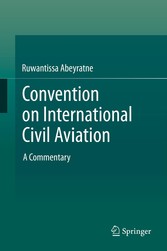 This book is both a repertory guide to the Convention on International Civil Aviation (Chicago Convention) as well as a legal analysis of the provisions of the treaty.  It traces action taken by the ICAO Assembly and the Council in the implementation of the Convention from the first ICAO Assembly in 1947 until 2012.  Above all, the book offers a commentary on the functional and moral fabric of the Chicago Convention, which is not only a multilateral legal instrument that sets out basic principles of air navigation and air transport, but also serves as a moral compass that brings the people of the world together.
The teleological nature of the Chicago Convention is reflected from the outset - from its Preamble which sets the tone and philosophy of the Convention - that aviation builds friendship and understanding among all people, to its technical provisions that range from rules of the air to landing at airports and customs and immigration procedures.  The book effectively demonstrates the Aristotelian principle - that rules make people good by forming habits in them.  Standardization, or in other words, compliance, is the driver of the Convention that keeps aviation safe, regular, efficient and economical.  To that end, this book traces and details  the sustained relevance  of the Chicago Convention  and the efforts of ICAO and the international aviation community towards keeping air transport on track and ready for its future exponential growth, both in letter and in spirit.
?

Dr. Ruwantissa Abeyratne has worked in the field of aviation law and management for over thirty years and is currently Senior Legal Officer the International Civil Aviation Organization. He holds the degree of doctor of civil laws (DCL) from McGill University, the degree of doctor of philosophy (Ph.D) from the University of Colombo, the degree of master of laws (LL.M) from Monash University, Victoria, Australia, and the degree of bachelor of laws (LL.B) from the University of Colombo. He has published 22 books and over 400 leading journal articles on international law and Aerospace law, in addition to many papers presented to conferences. Some of his latest books are Aviation in Crisis, Aviation and the Environment, Aeropolitics, Aeronomics and Law, Air Navigation Law, Aviation Security Law, Space Security Law, Airport Business Law and Aviation and the Carbon Trade. Dr. Abeyratne is a Fellow of both the Royal Aeronautical Society and the Chartered Institute of Logistics and Transport. He is also a member of the British Association of Aviation Consultants and the International Law Association, in which he serves as member of both the Association's International Trade Law Committee and Space Law Committee. He is a founder member of the Montreal Branch of the Royal Aeronautical Society and Chairman of the Air Law Group of the Branch.